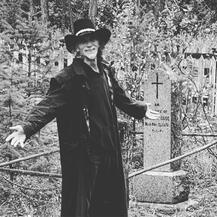 In the summer of 2010, Tony and I decided to explore the old ghost towns of Blakeburn and Granite Creek - just northwest of Princeton. While we were staying at a lovely little motel, in nearby Coalmont, the proprietor told us the tragic tale of Hattie McBride - the Madam of Coalmont.

Hattie McBride was a real person. It's believed that she lived in Greenwood (BC) and later moved to Coalmont where she opened a brothel. She was murdered in 1920 but the murderer was never found. Hattie was buried in the Granite Creek Cemetery but history records little else, not even a photograph. Sadly, that's where her story ends.

That weekend we visited the site where her brothel once stood and the cemetery in Granite Creek. Something about her story struck a chord.

​A few years later, during a writing class, the instructor gave us an assignment; write the first chapter of a novel. I was unsure as to what I wanted to write but, as fate would have it, I travelled that weekend with some friends to Tulameen and I took them to the Granite Creek Cemetery. As I watched my friends talking at Hattie's grave, I listened as they wondered what happened to the woman; that's when an idea was born.

Over time, a story began to emerge. Tony and I spent hours discussing plot lines and characters; dialogue that made us laugh and scenes that didn't work. After writing the murder scene, Tony decided that the murderer should be someone different. It was a great twist, that never crossed my mind, so I wrote the entire scene again!

After I submitted the manuscript to the editor, we made a trip back to Granite Creek to visit Hattie's grave and take some photos for the front cover. We had come full circle... it was a bittersweet moment.

We hope you enjoy this story as much as we enjoyed writing it. Tony & Dawnelle Guenther